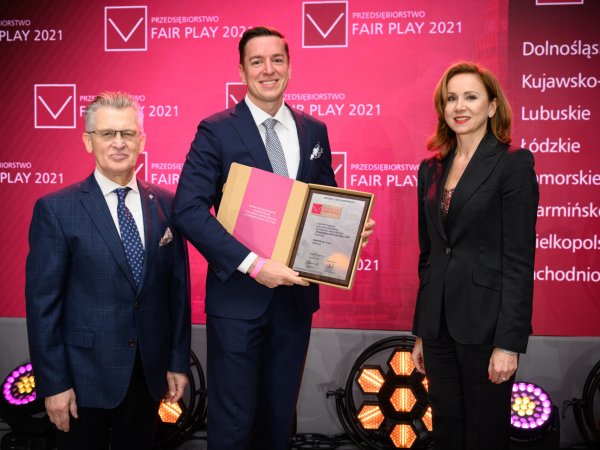 On November 26, at the Palace of Culture and Science in Warsaw, the official announcement of the results and the awarding of prizes to the winners of the “Business Fair Play” 2021 program took place. Troton, the owner of the Sea-Line brand, was awarded for the seventeenth time. The idea of ​​the Fair Play program is to encourage Polish companies to adopt an ethical business model and introduce changes not only in the internal organization of work, but also to shape positive relations with the local community and care for the natural environment.
The Idea Business Fair Play has a long tradition.

The program was created in response to a competition announced in 1997 by the Polish Foundation for the Promotion and Development of Small and Medium Enterprises (currently: PARP), for projects promoting entrepreneurship culture in Poland. Project entitled “Ethics and entrepreneurship culture in small and medium-sized enterprises”, submitted by the Institute for Democracy and Private Enterprise Research and the Polish Chamber of Commerce, won and was financed by the European Union.

As a result of the work of the Institute in 1997-1999, a study entitled “Principles of ethical business responsibility” including, inter alia case studies illustrating ethically difficult situations that entrepreneurs face in their work, a code of ethics was developed and the “Business Fair Play” program was created. Its first edition was carried out in 1998 and was addressed to SMEs, and from the second edition in 1999, the “Business Fair Play” program adopted a formula open to all enterprises, regardless of the number of employees.
Photos and description orgin:  fairplay.pl

Other threads in this category

Sea-Line yacht paints are designed for painting the surface of boats and yachts made of various materials, e.g. laminate, wood or steel. We do not have a certificate of the National Institute of Hygiene, which would allow the use of yacht paint to paint the tank with drinking water.

Familiarize yourself with our offer of boatbuilding materials and paints